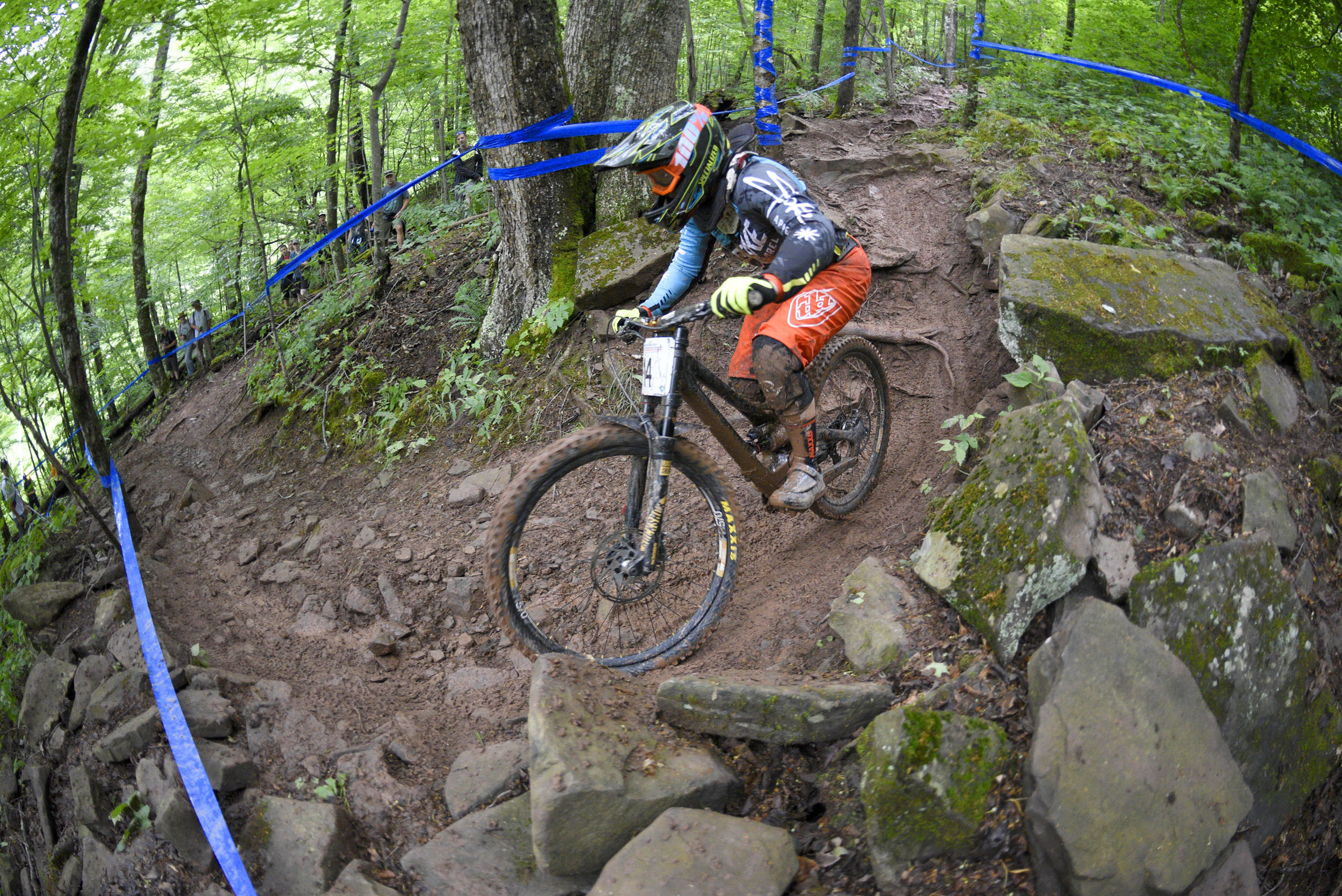 2017. The year one of our own makes it big on the pro circuit. Could not be more excited, proud, happy and thrilled. What you aren’t hearing me say is that I’m surprised. Cause I ain’t. Amy is one of the most driven, balls-out bike riders our crew has known. Locally, we’ve known it for a long time. On the East Coast circuit, everyone’s known Amy as a guaranteed pro podium in almost any race. But this. This takes our gal from regional to national. Wed. practice saw no rain, but the track was wet from the week of rain leading up to the pro race and pro practice. Amy slow-rolled the entire course, hitting cup cake blind on the first pass. Her initial reaction to the course had her feeling like she didn’t belong there, that it was way too dangerous and that she should turn around and go home. But she pushed through and completed a second run. Things felt better. After this run, she felt like she may have figured somethings out enough to stick the week out. Track conditions were the best they would be all week. Amy built confidence off this day and did the most learning of the course by being able to ride it at near speed and link multipe sections together. By the end of Thursday, confidence was high. Monsoon storms. Totally different track. Soaked, roots, rocks, trail, everything. Why was the track so hard to begin with? Because the trail crew at Snoweshoe felt that National Champs should be harder than a ProGRT course. And man did they make that happen. Riders were getting broke off, sliding into the woods, unable to control turns and corners on steep chutes where a catch berm was your only hope. There were sections so gnarly, Gwin and Kintner petitioned to have sections removed/re-routed and were granted the requests. Crazy.

Watch YT Mob’s video to see how bad conditions were.

With only 12 total practice runs in over 3 days of practice, Amy decided to use her time wisely. She watched riders in every section. Instead of riding, she studied. She studied hard. And it paid off.

The tide began to turn a bit for Amy. To put it into my own words, she smelled blood. She could see other pro riders struggling. Riders who normally beat her out. The length of the track, the over abundance of wet root sections, two road gaps, multiple rock drops and steep chutes with corners that were nearly impossible to make. She used this. It fueled her desire to persevere.

With no real time to do full-pull runs, Amy continued to sit at sections and watch who made it through and what they did to make it. She mentally measured speed, body english and braking points. Then went to the top of those sections and just let it rip. She told me she had to completely commit to it being OK as long as she matched the speed and technique of what she saw successful riders doing. Once she got through a section good enough, she left it at that and moved on to the next. Given this format, there was no way for her to master any one section so “good enough” had to be good enough. Practice was originally set from 2:00pm-3:30pm but with more monsoon conditions, multiple weather holds pushed practice until 3:30. Lifts started running again, 90 mins to practice with seeding immediately to follow. The pressure was on, big. After picking through the track again, Amy felt a tiny bit more comfortable and wanted to get down as safe and as cleanly as possible. She seeded 7th with a conservative run and multiple errors along the way. She would improve on this by 3 positions come her race run.

The perseverance paid off. Big time. With as clean of a run as she could put together, she pushed through. Said she left an easy 15 secs on course by choosing to go around the second road gap and one of the rock drops. The end result was roughly 38 seconds off long-time national champ, World Cup pro and Olympic BMX bronze medalist Jill Kintner; an amazing, life-time finish by anyone’s standards. You have to consider this folks; Amy has an easy 10 years on the entire top 5 podium. Let that marinate.

When it came time for pro podiums, Amy got all set up in her kit and waited for them to call her name. There were five boxes on the stage. To our entire team’s disappointment, those 4th and 5th steps were removed minutes before officials started calling names. USAC only went 3-up on the boxes and we did not get that life-time photo we were all hoping for. Gotta say, USAC is known for being a stick in the mud (pun intended) whose questionable decision making affected so many all weekend long. Leave it to our Amy to face this one with grace too. She said, “It bothered me for a while, then I just let it go. They can’t take the result way, no matter what they do. I won’t let it get to me.” And that folks, are the words of a true champion.

“It bothered me for a while, then I just let it go. They can’t take the result way, no matter what they do. I won’t let it get to me.”—— Amy Leishear I have these photos here (of Aaron and Jill) because this is the company Amy was in this particular weekend. They are here to serve as a reminder, without that podium shot, just how special this achievement is for Amy. How many years in a row has Jill been the national champ? Gwin? These two riders are our national main-stays. And Amy gets to share a sliver of that light in a significant way. Folks, this is closer than most of us will get in our lifetime. And to do it in the worst conditions possible, on the hardest, longest, most physical track speaks to this woman’s character, physical and mental determination and raw ability. Amy – you are my good friend, and have been for years. I am so happy for you. Big congrats from the bottom of my heart. Thank you for being a part of the team since the very beginning. I share a small part of this honor with you, as does the entire team, and we hold you in the highest regard as a professional athlete, our friend, and our riding buddy. “We throw our positive energy out there into the bike ether and what comes back is unbridled, unyielding complete support from the bike community around us. How rad.” —— Mike Karfakis

Ma Bell, Mark Bell & Pittman Family
Thanks for the hospitality your families showed Amy. These two families had a spot near the top of the lift and they let Amy set up there every day, even helping her with laundry. Great people! Especially you, Ma Bell!

Mike Render
Amy’s husband Mike and a personal friend for over 10 years strong. He is one the best wrenches we know. He is constantly dialing her rig and making it ride exactly the way Amy needs it to feel. Prior to this race, Mike made suspension changes, saddle changes and drive train upgrades that most certainly helped make the difference. Thanks for all the support Mike. Your wrenching made it happen buddy!!

Mark Wallace
Mark is one of the house wrenches at Snowshoe and the catalyst for getting Amy started in DH years ago. Amy’s had a good personal relationship with Mark for years. He took care of her rig when Amy needed him. Can’t thank you enough Mark!

SRAM
SRAM was onsite doing no-charge race support for almost anyone that needed help. Complete fork rebuilds in an hour, complete drivetrain over-hauls. You name it, they had your back. From everyone at Spoke Apparel, thanks for being a part of making this podium happen!

Jeb & Jay
Big shout out to Jeb Wallace-Brodeur and Jay Shultz  from GoJam Media. We purchased some of the photos seen in this post, others were given to us by Jay and some were borrowed with credit from the PinkBike.com article on the race. Without guys like you, we would have much less of a story to tell. To be able to pay $6-$10 bucks for amazing photos of ourselves in epic race scenarios is the most amazing deal anyone could ask for. Please, everyone, support these photographers and buy your photos when they post them to Roots and Rain. Those of us with full-time jobs in media realize how special these guys are, and how they are parting with their art at such a low and reasonable price points. Thanks fellas.